Peter Hardin, a former U.S. Marine who served in Afghanistan, announced Tuesday he will challenge incumbent Orange County District Attorney Todd Spitzer in next year’s election. Hardin, 42, says he would seek to clean up what he sees as a scandal-ridden office, which has been hit with accusations of running a secret DNA database. He also describes himself as a progressive prosecutor.

I spoke with Hardin recently about his candidacy. “I’m not a politician,” he said, contrasting himself with Spitzer, who was a state assemblyman and member of the OC Board of Supervisors before being elected DA three years ago. Hardin is a Democrat and Spitzer a Republican, although the office is non-partisan.

In describing himself as a progressive, Hardin echoes L.A. District Attorney George Gascón, who is among a cadre of new progressive prosecutors around the country with an agenda of rolling back lengthy prison sentences and erasing racial disparities.

But Hardin stopped well short of promising sweeping changes like Gascón. Instead, he said he would seek to find “a correct and proper model that fits Orange County.”

For example, while Gascón has tried to end the use of almost all sentencing enhancements that can add years to a person’s prison term, Hardin said he would end certain enhancements but would not say which ones.

(Spitzer has built a reputation as a traditional tough-on-crime type of politician, although he’s now positioning himself as a progressive. Last month he issued a statement in which he said American society has “engaged in systemic mass incarceration” and has “prosecuted people of color differently.” Spitzer promised to work to end mass incarceration and to set up a unit to review allegations of wrongful convictions.) 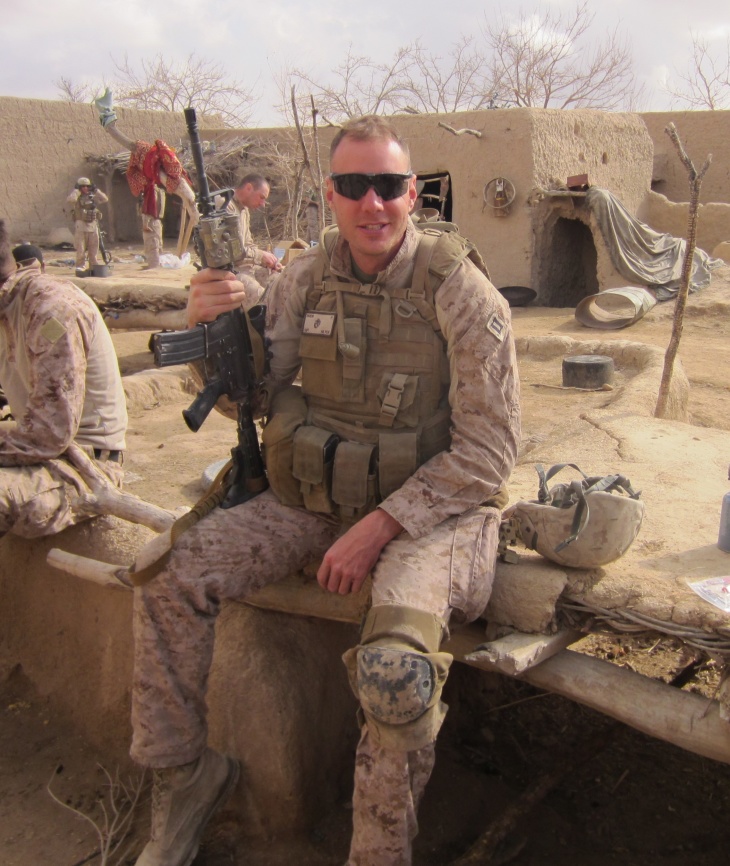 Hardin said he had two dreams while growing up in New York City: to follow his father into the law and to become a Marine. He achieved both at the same time when, after graduating from George Washington Law School, he joined the Marines as a judge advocate. He eventually rose to the rank of Captain and served a year advising the First Reconnaissance Battalion commander on the laws of war and international law issues in Afghanistan.

Hardin landed in Orange County in 2012 after he was stationed at Camp Pendleton. He spent a year as a deputy DA and two years as a Special U.S. Attorney before moving into private practice.

As we got started, Hardin warned he’s a first-time candidate and just getting used to dealing with the media. But he said because he was a Marine, “don’t hold back.” Hardin also stopped to adjust his hearing aids, needed because explosions in Afghanistan damaged his eardrums.

This conversation was edited for clarity.

Q: Why are you running for DA?

A: I’m running because there’s a vacuum of leadership in the Orange County district attorney’s office that has led to a sea of outrageous scandals. This is a rudderless office with a leader that seeks the headline but doesn’t want to do the work. Todd Spitzer has forfeited whatever little credibility he ever had.

Q: Elaborate on what you see as the most significant issues inside the DA’s office?

A: First, Todd Spitzer has become the subject of no less than four sexual harassment lawsuits here in Orange County. [Editor’s note: Spitzer has been accused of witnessing his former senior assistant and friend engaging in harassment.] He promoted his best friend, for example, the best man at his wedding, even after becoming aware that this man had sexually harassed his subordinates. And when these allegations began to come to light, Todd Spitzer allowed his best friend to quietly retire from the office with top-flight benefits.

Then there’s the evidence booking scandal. Deputy sheriffs have not been looking at evidence properly or in a timely manner. And what Todd Spitzer has done is cherry pick a few selected officers to punish so that he can grab the headline and claim that he’s a reformer. But he hasn’t lifted a finger to address the underlying issues. And again, he hasn’t led with the transparency to explain to Orange County residents what exactly the problem is.

Q: How will you deal with victims of crime as DA?

A: I want to launch an innovative family justice center to connect survivors of domestic abuse and sexual assault, elder abuse and child abuse to services they need to heal and pursue justice. I am extremely concerned about the low rates of sexual assault reporting. We must support survivors of sexual assault so that they feel like they can come forward. And that’s not just important for today’s survivor. It’s to prevent future victims because sex offenders tend to be repeat offenders.

Q: In LA, DA Gascón has eliminated the use of almost all sentencing enhancements, arguing they contribute to mass incarceration and racial disparities. What’s your view?

A: Well, sentencing enhancements can result in excessive prison sentences and those sometimes do not enhance public safety but do cost taxpayers billions. Studies demonstrate that excessive prison sentences may actually increase recidivism rates by undermining a person’s ability to reintegrate back into society in a positive and productive manner. I’m not going to do away with all sentencing enhancements, but I want to take a real close look at finding a correct and proper model that fits Orange County and our values in our communities in a smart and strategic way.

Q: Would you commit to eliminating gun and gang enhancements (as Gascón is doing)?

A: I’m not prepared to answer that right now. But I will keep enhancements around hate crimes, sexual crimes regarding children and others, elder abuse crimes, and white collar crimes like fraud, where there is a particularly large loss. But I want to change the culture within the Orange County DA’s office to ensure that prosecutors aren’t sort of instinctively and reflexively charging everything they possibly can in order to start negotiations from a position of strength.

Q: What is your position on the death penalty and a sentence of life in prison without the possibility of parole?

A: I’ll punish the most heinous capital murders with life in prison, imprisonment without the possibility of parole. But I will not pursue the death penalty. Mainly, I want to train and empower my deputy district attorneys to treat each case on its own merits and without blanket policies.

A: I’m in favor of ending cash bail. I think it’s an outrageous system that we have where wealthy, dangerous offenders can get out while folks from less affluent communities who may not be dangerous are forced to be stuck in prison.

Q: On police shootings, are there any shootings in Orange County where you think the officer should have been prosecuted? Also, would you have handled these shootings differently than the incumbent DA?

A: I am not aware of any. By and large, our law enforcement officers do the right thing and they’re heroes. But I won’t be afraid to prosecute officers when they break the law.

Q: There’s been a lot of criticism of the DA’s DNA database. The UC Irvine civil rights clinic has filed a lawsuit that says he has created a “secretive system of genetic surveillance that was never authorized by state law.” Would you keep that database?

A: It’s one of the greatest examples of Todd Spitzer’s hypocrisy and the lengths to which he will go to get elected. He ran as a reformer who was going to get rid of his DNA database. [Editors note: As a county supervisor, Spitzer had questioned the ethics of the database. After winning election, he told the Orange County Register that he was “incredibly concerned that they are misusing the DNA lab to get convictions,” and that he wanted to consult with experts about whether to keep it. ] Todd Spitzer has been in office and he has completely embraced and defended the program. I agree with these lawsuits. I don’t see [having a DNA database] as appropriate.

Q: Some activists say gang databases should be eliminated because people who are not gang members get tossed into them. Thoughts?

A: I’ve heard enough from folks who have gotten swept up into that system to know that many, many of the entries into it are arbitrary and capricious. And I want to take a hard look at that and figure out how we can either reform it or get rid of that.

Q: Why do you think Black people are overrepresented in prosecutions and in state prison?

We talked earlier about the underlying issues that lead to aberrant behavior like mental health illness or drug and alcohol addiction. Well, to put it simply, affluent kids go to rehab and other folks, who happen to be people of color, go to juvenile hall or jail. So one thing I really want to work towards is ending punishment for low-level nonviolent offenses. Those have swept up a disproportionate number of folks from our minority communities into the system as well. It’s the product of a system of racial injustice in this country, the roots of which go so deep. And I’m glad that this country finds itself after the events of last summer at a reckoning point.

And I certainly want to spend time working with police officers in Orange County to help everyone in our community understand the effects of systemic racism. We also need more diversity in the DA’s office. That will be something I will work with local law schools, law schools around the state and the region to ensure that we are recruiting talent across a broad spectrum of communities.

This article was originally posted at:
LAist

UNTIL BALLOTS ARE DUE!

Use of military rank, titles, or photographs in uniform do not imply
endorsement by the Department of the Marine Corps or the
Department of Defense.